Posted at 19:32h in Uncategorized by MSV

We’ve just completed Week 2 in the 2018-2019 school year! This week, we added two subjects; Science (both) and Spelling (Grade 4) and they both slid in well to our weekly schedule– one  reason I enjoy a graduated schedule. Besides, it does not hurt that my youngest loves his spelling time and they both were looking forward to AgriScience. Like Week 1, we began with our Young, Gifted and Black Studies (YGBS)! We also continued with two intentions, one ancient proverb, and one quote. Our favorite this week was the ancient proverb taught to us by the Aboriginal Australians. Let’s do this!

Cathy Freeman is an Aboriginal Australian who is known as the 6th fastest women in the world! She had also made history as the first indigenous Australian to compete in the Olympics, winning a gold medal in 2000. (We use Young, Gifted and Black as our spine.) 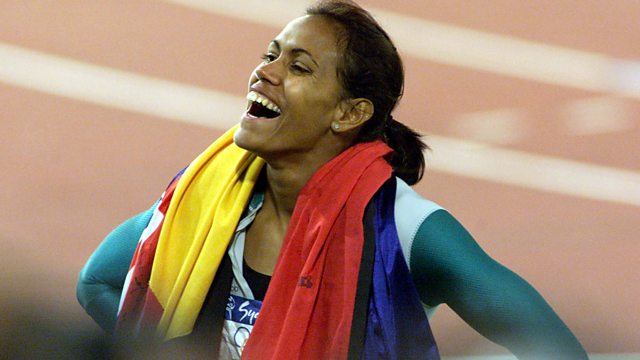 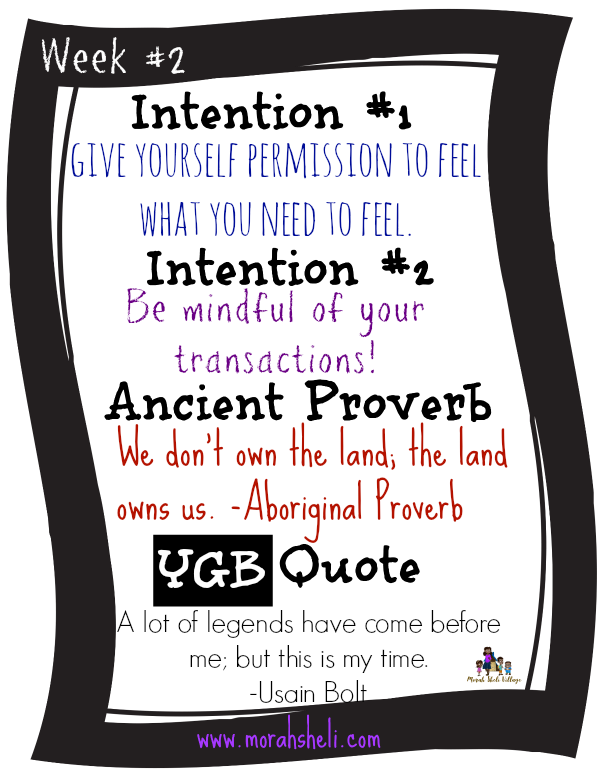 We read I Samuel 24 and 26 together and completed a cross-chapter study. They had to decide if these chapters were variants of the same story or different stories that happened to have similar details. Hmmm…fun times! We also read Psalm 57 and analyzed it poetic and lyrical value and meaning. We focused on unfamiliar language and repetition. We meet a couple named Nabal & Abigail and learn more about David’s fugitive years as he was on the run from King Saul. With a small box, miniatures, and hot glue, they each had to recreate a scene from the narrative in I Samuel 25. They both fancy hands-on projects and were all over this. Both of their scenes came out quite nice. We finished the week up with I Samuel 27 learning about the concept of peace in Ancient Eastern cultures and vassal treaties. 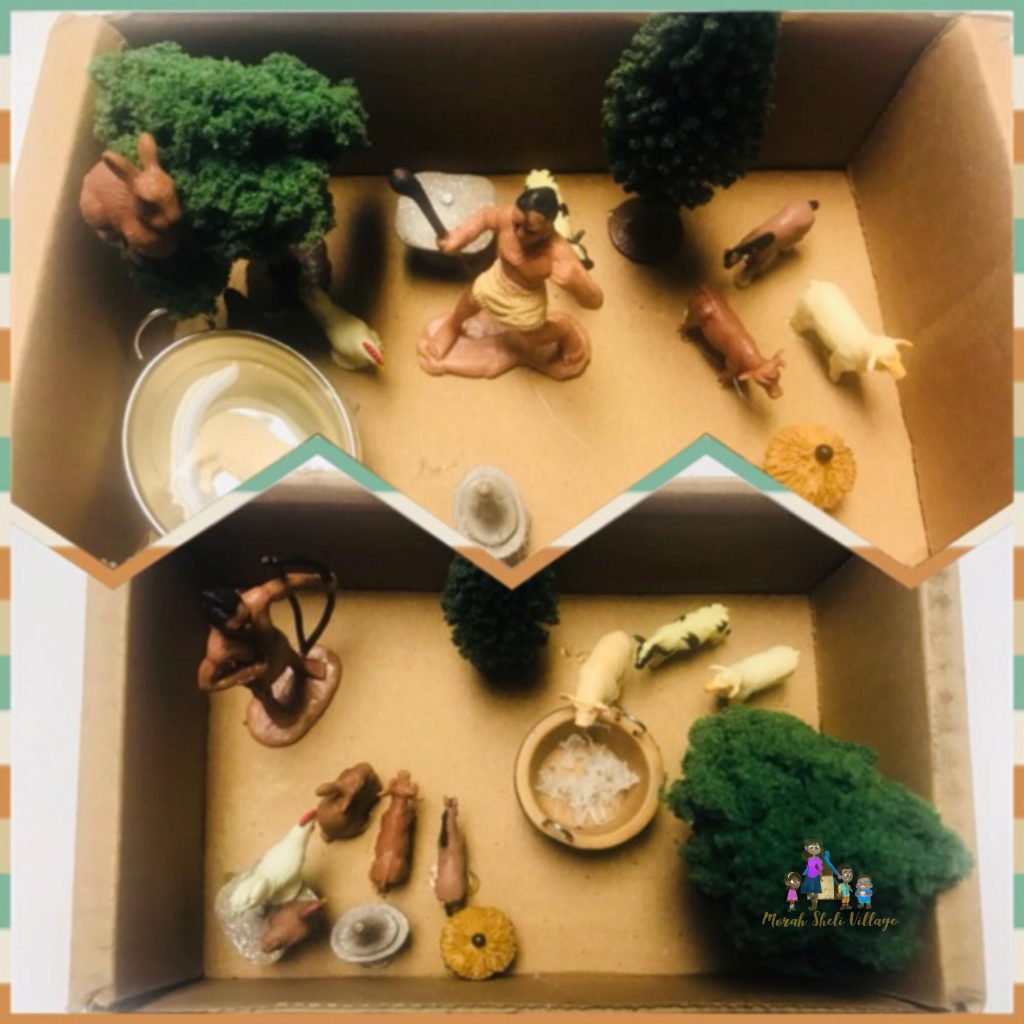 In Grade 7, we learned about puns, morals, and proverbs  through riddles and stories, especially Anansi and Turtle. (Anansi is a household favorite character here.) Then, we practiced shades of meaning with different forms of verbs and synonyms while reviewing definite and indefinite articles. Last, we went over various genres of literature: prose, poetry, drama). In Grade 4, we began Spelling with the basic consonants review.

For the most part, Agriscience constitutes 2/3  of our science learning while Herbal Science includes 1/3 for this term. In Agriscience, we mapped where our food came from throughout the entire nation. It appeared that California, Texas, and Georgia led the way. Though there are times when we will learn about the nation or the world in terms of food selection and security, we are overwhelmingly studying agriculture on the state level. To begin, we learned about Georgia’s top 10 crops and zoomed in on the top 5. Even from Grade 1, they recalled that our state is known for the 4Ps: peanuts, pecans, peaches, and poultry; so they made an instant connections when they saw these foods on the list. We are also learning about the business-side of agriculture, so I had them record the value of each crop in their Agriscience notebooks. When they saw that broilers brought in $3.86 billion, they finally understood my saying of, “the land is the wealth.” Both of them read a mini-article on farm practices then and now and compared the two time periods. My 7th grader read an article about the history of agriculture in Georgia. Last, we watched a quick video on Georgia’s agriculture by region.

In Herbal Science, we learned the difference between an herb, weed, and spice with both fresh and dried herbs available to smell, touch, and taste. I have them a lesson on the “secret of plants” and read them a plant story from Shanleya’s Quest. I explained the difference between flora and fauna and defined the role of an herbalist. Then, we put on our own herbalist hats on to make herbal sock baths while learning about the properties of rose, chamomile, lavender, and salt. It was so fragrant in the room during out herbal lab! 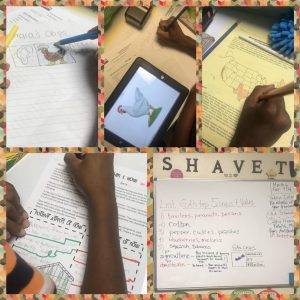 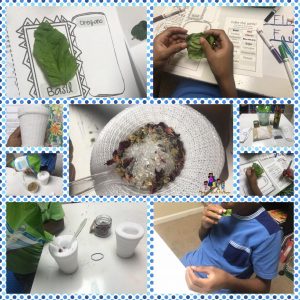 Spanish classes began one week before we started our school year, so they’re already three weeks in and my 7th grader had his first quiz on la clase (the classroom). He did a great job and next week we’re moving on to subject pronouns. In 4th grade, we’re learning about la familia (the family) and the titles of people we are related to; and we also reviewed our colors.

In piano, it was note reading week! We were introduced to note works (treble and bass) and note spelling. In grade 4, we learning about stems, flags, black notes, white notes, and whole and half notes.  In grade 7, we worked on note reading heavily and applied that knowledge to playing. His piano teacher and I are aiming toward him playing “effortlessly” where he is not having to think about the note before he plays it, but just plays is automatically. So, we have a few reading drills in our near-future. 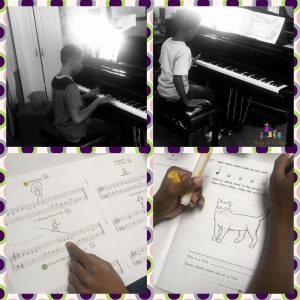 In History and Geography, we learning all about Australian animals and Aboriginal Australians. While I was planning, teaching these two topics together seemed right to me, but I had no idea how perfectly they paired until I started teaching. Considering the Aboriginals respect for the land and animals with the fact that their Dreamtime Faith is animal-based, it was so helpful to first understand Australia’s animals. We learned about 12 native animals and decided that koalas, wombats, and dingoes were among our favorites. Each of them also completed their own Australian Animal Report. I read a case study on nonnative species in Australia and we discussed how these animals are changing the environment and affecting the animal life of native animals. Apparently, when Europeans arrived they brought over new species of  animals (buffalo, rabbits, sheep, etc) with no consideration to consequence. As a result, the land is suffering and some animals are endangered. 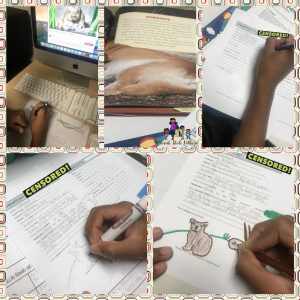 We used this book to learn more about Australian Animals.

Moving into Aboriginal culture and faith, we learned about creation myths, legends, and the idea of the Dreamtime. Each day, both of my sons read a new legend out loud and we conversed about the moral, lesson, and/or main idea of the story. We also learned about their social structures, communication, and their idea and practice of law & order. We narrowed in on the Aboriginals’ view that all living things are related and that…

Spirituality is based on being responsible for, and respectful to, the land, the sea, the people and the Aboriginal culture. 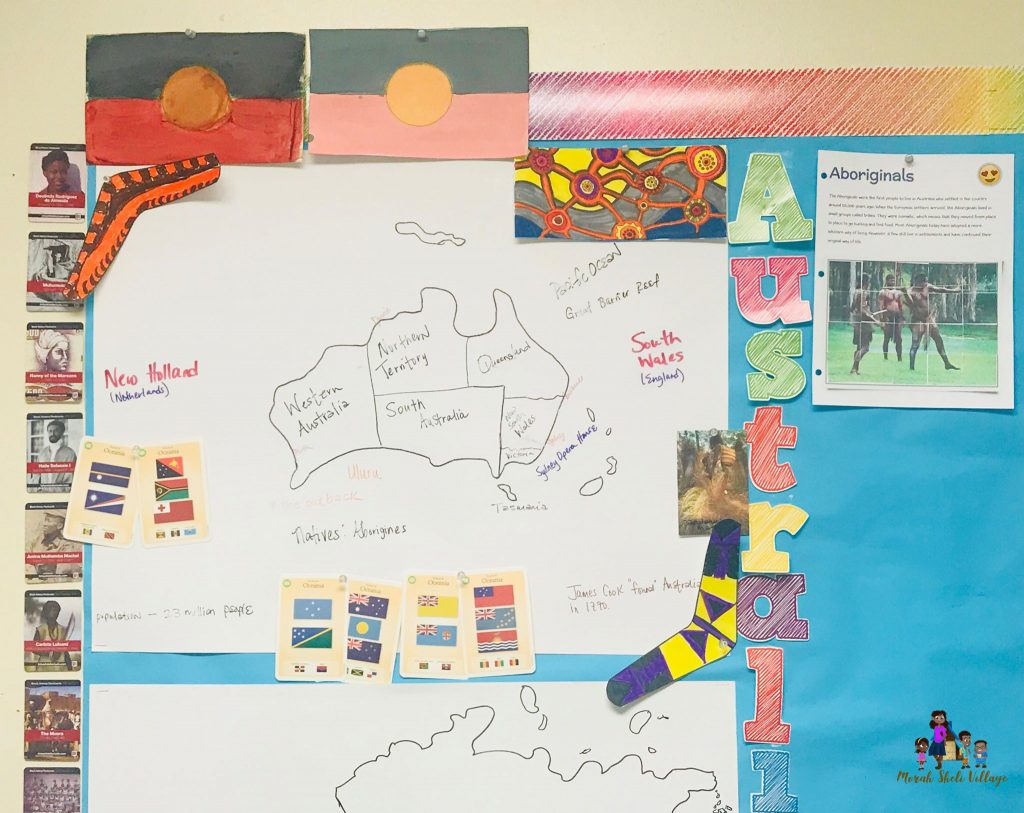 As we learn, we add samples of our work to our “Australia Board.”

My personal favorite was the Ancestor Spirit and the totem figure that each group/tribe/horde ascribes to and their sense of peace, morality, and respect within that social order. They week was filled oral storytelling traditions, initiation ceremonies (where we focused on the passage of a child into adulthood), and mourning. We wrapped up our Aboriginal studies with culture, music, and art. We colored special patterns, crafted boomerangs (and understood the difference between the returning and the non returning stick), enjoyed the sounds of the didgeridoo, listened to kookaburra stories, and wrote our own Dreamtime Legends.

Did you know that Aboriginal Australians do not like being  referred to as “Aborigines?” Just Aboriginal.

We use this text as a spine for our deeper Aboriginal Australian studies.

Briefly, we divided Oceania into its three main island groups as a segue-way into next week’s lessons. Pictured: (1) The mini flip-book was download from TpT. I shrunk the pages and hole-punched them for easy reference during instruction. (2) The Oceania Chart is a resource I made to help with the island geography knowledge. (Since both Guam and Hawaii are in Oceania, but are a U.S. territory and state respectfully, we discussed why that that it so and it gave them a chance to see how far both are from the mainland United States.) (3) Our World Geography and You student text and workbook.

Our read aloud selection for Australia is Walkabout by James Vance Marshall. We’re almost halfway in now and my sons are all in. They have begged me to keep reading each day this week. Marshall’s word choice and description detail is top-notch. We’re all very engaged in his narrative. A friend of mine with much younger children is also teaching hers about Australia and she says that Bob by Mass & Stead is a hit over at her house. So, if you have children 9 and under you may want to check that one out.)

It was my plan to only spend one week with this novel, but we were all enjoying it so much that I decide to add some extension activities and keep the learning alive. I am so glad that I did. (So, there goes “homeschool plan” for Literature class. I’m sure we’ll get the time back somewhere, but I really do not care. That’s the beauty of home education.) We continued to immerse ourselves in Polynesian culture. I became curious about the Black and Brown people’s arrival in Australia and went on a search for a little extra history and geography. I learned about several people groups (mainly having a origin in Arabia) who either traveled east into Asia, Australia, and Oceania or west into Africa. Obviously, we focused on Australia and Oceania. Of course, we watched Moana and saw so many “new things” having recently studied the culture. Next, we completed a Plants and Animals in the South Pacific chart. We all love learning about indigenous plants and my sons are really interesting in indigenous animals, so it was a win-win. Our close-out activity in Grade 4 was a comprehension quiz and in Grade 7 it was an assignment that asked him to judge the courage in several acts, defend his position, compare it to Mafatu’s courage, and write his own definition of courage; together they crafted their own “Mafatu necklace.” One novel down, however many to go. We’re reading a few short stories before we dive into our next novel.

Since Monday was a holiday, we only watched one episode of CNN Student News and we made up for the other day with a TED Talk. In the news, we learned about a typhoon in Japan, a cyclone in Mexico, and elephants in Botswana. We watched a TED Talk about an Aboriginal woman, Tui Raven, and her experience growing up in Western Australia. Some of the snide remarks and situations that she shared she experienced were similar to being Black in America. The most-interesting to us was the phonetics of Aboriginal languages. We both pronounced the word, but I suspect learning Hebrew had lots to do with that. I must say, the speaker looked more mixed-race than Aboriginal. But, we all know how that goes.
I’ll see you all next week for Week 3! We’re adding Writing (Grade 7). Peace and blessings in your next week of teaching and learning.