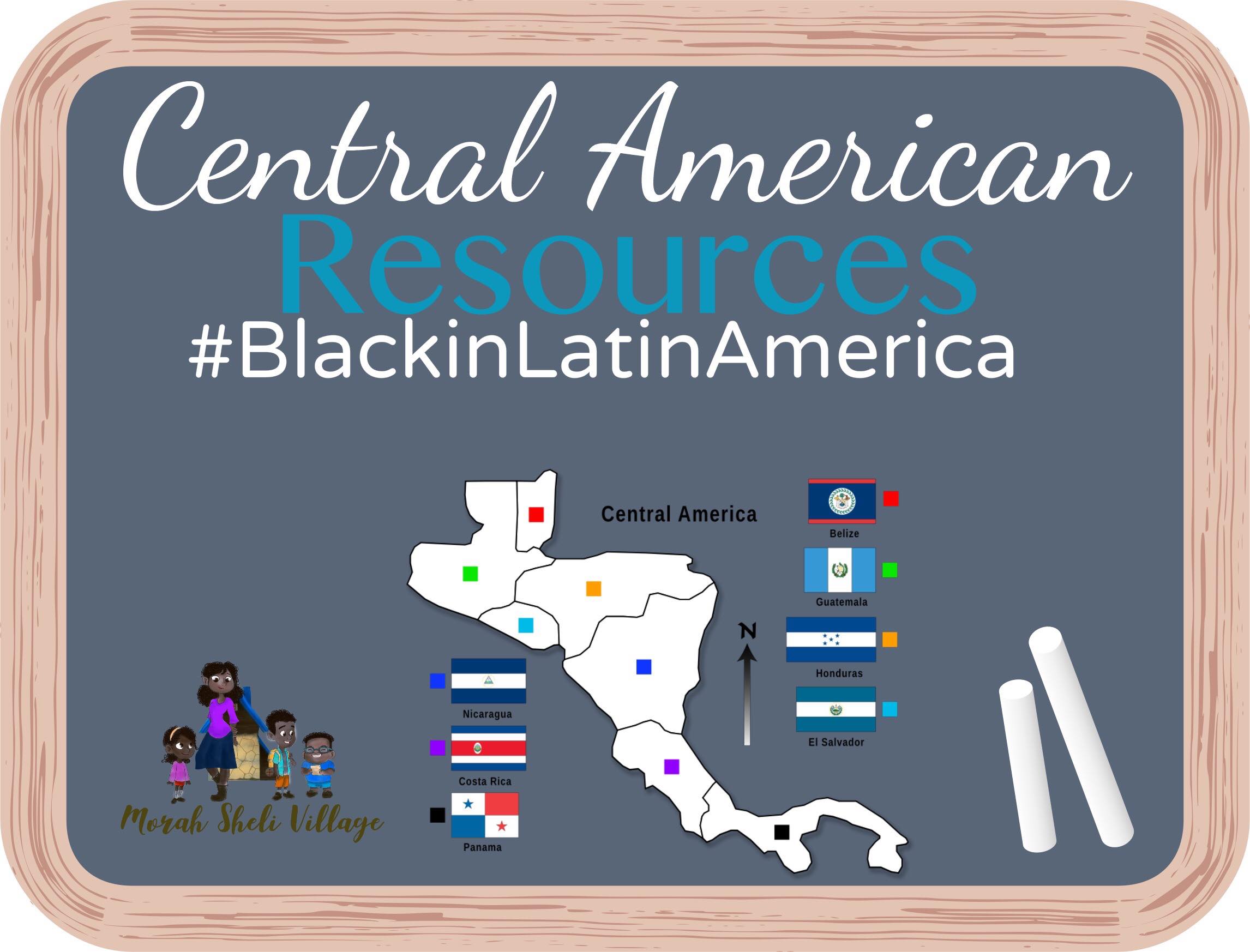 We have a three-year history plan for teaching world history ’round these parts! This year, we began our first year; so, we packed our bags to head south and visit Central America, the Caribbean, and South America. I’ve received several requests to share the resources used during our studies. Because each region has its own special area of study, I will share our resources in a three-part series. First up, Central America!

Before we began our country-by-country study, we learned about the Latin American Geography, First Americans, Conquests of Latin America,  and Colonial Latin America.

First, I wanted my sons to understand that all three regions: Central America, the Caribbean, and South America is collectively called “Latin America.” (Then I had to explain that Central America is not actually a continent so geographically-speaking these countries were North American.) I used this Power Point as an overview.

Even though, I had it planned teach the conquests of Latin American (which would explain all the mixing and people groups), I still wanted to teach my sons a basic overview of the main peoples that would “meet.” I taught them about the Natives, the Mulattoes, the Mestizos, and the Zambos. (Later, we added Creoles once they understood the racial classes and conquests more.) I could not find a decent activity to help them understand the names of these people and why, so I created this People of Latin America activity sheet.

Each time we moved to a different continent, we revisited the same geography skills and concepts (and add more as needed) and applied them to our new location. We had already studied the States and Africa, so they were pretty-well versed with basic geography. However, the tropical geography and climate was mainly new to them, so the majority of our geographical studies was from that perspective. Here’s a list of resources I used to teach (Latin American) geography: 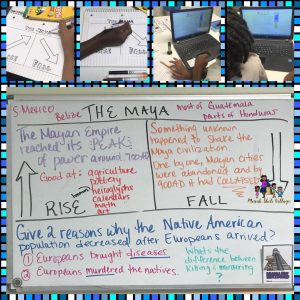 We learned about the Culture of Latin America: Mayans,  Aztecs, Incas, Conquistadors, Africans.

During this time, it’s also very relevant to teach about the line of demarcation. 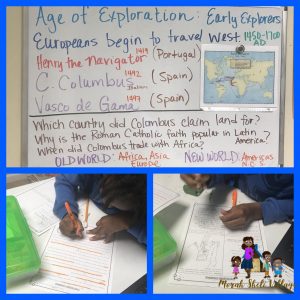 After my sons understood all the overpowering, enslaving, and colonizing in Latin America; we compared Latin America to North America to find lots of similarities. In this section of our learning, we added the influence of Christianity and Catholicism as well as enslaved Africans in the Americas. 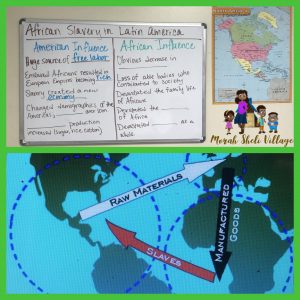 For each country, we learned basic fun facts, regions/geography, climate and crops, historical overview, tourists attractions, culture (music, arts, cuisine, language, holidays etc), famous/well-known people, bordering countries and oceans, animals, the country’s relationship with the USA, the Black population, and last who we named our “afro rep.” We used these country sheets to record and understand basic information and geography. I wanted both of my sons to have their own country maps so they could learn its shape and record popular cities. I could not find anything I was looking for, so I made a set myself.

We kept a Central American lapbook while we studied the following countries:

I have been wanting to expose my rather artist-brained children to the works of Frida Kahlo and studying Mexico gave the perfect time. (We also learned about Diego Rivera.) They really loved this art assignment where we drew self-portraits mimicking her signature technique.

When we learned about Cinco de Mayo, I used this flipbook for my third grader and this concept map for my sixth grader! They were really engaged with it.

For a review of Latin American Geography, we used this Color-by-Number activity. 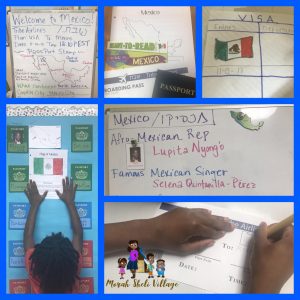 My sixth grader and I watched the Netflix documentary “Living on a Dollar a Day” and complete this “How Much Do I Spend in a Day?” activity. This was such an enriching experience for him and a little bit of an eye-opener as well. For the rest of the countries, I used a resources I found at a used book store and I have not be able to find a link to it to share. If I do, I will come back and add it it for you. It was very helpful.

We hopped on our devices and complete the Panama Canal Web Quest. This lesson sent us on a small bunny trail where we discovered some interesting things about the relationship between Panama and the USA. 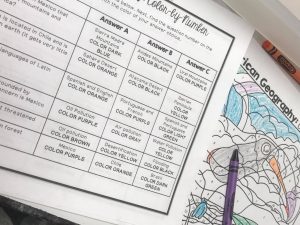 There are a few Wonders of the World located in Central America! (I bought this research activity because I knew we’d be studying the other wonders in coming years.)

For country review, I made hexagon templates covering a fun fact, the afro-rep, the capital city, language, and currency. On our last day “visiting” each country, we filled out our hexagons as a mini quiz. At this point, they could record all of this information naturally. I am sharing the Mexico and Panama hexagons with you as a freebie! (If you want all the hexagons for each country in Central America, it’s only $2.00.) 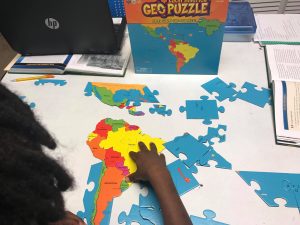 After we studied all the countries, I planned a review week. A part of the review, I made an Afro-Latinos quiz. I knew adding African representation would matter, but my sons took it to another level! They were so eager to complete it and discuss. They had remembered each one; but their favorite one was the rapper SHYNE. (If you want the Afro-Latinos quiz, it’s $3.00. The quiz is editable.) I also had them assemble the Latin American puzzle together! They memorized the country shapes by review week and could put together the puzzle in no time.

I did not know how effective this would be; and it was perfect! They have to shower daily, right? Their country names and geographical direction greatly improved with this curtain.

There’s so many shades of brown in Latin America! My sons appreciated these multicultural markers during our studies.

I have a son who looks very similar to Swift and he just had to have this book! #RepresentationMatters This is a good book to understand continental geography.

I really like this book for the many shades of colors represented throughout the world. We mainly used it for language exposure.

A fact-fun book that appeals to visual learners and children. (We will use it for our Caribbean studies too.)

I hope you enjoyed this resource share of Central America! I will be back to share about our time learning the Caribbean and South America. If you have studied or visited Central America, I’d love to hear about it. Where did you go? What did you use to learn? Until next time…